Ruslan Stefanchuk: We will be grateful to Germany for every decision that will help strengthen Ukraine's defence capabilities 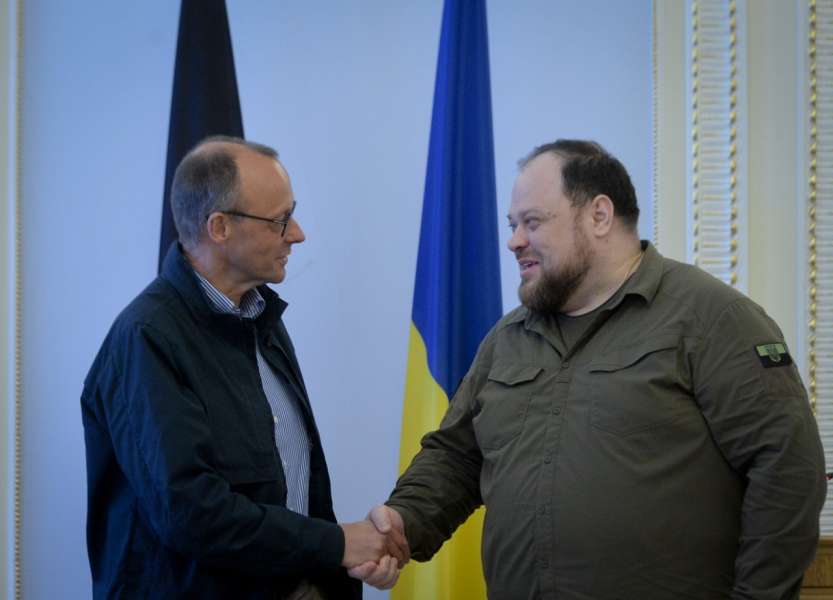 During a meeting with Friedrich Merz, the Chairman of the German Christian Democratic Union, Ruslan Stefanchuk, the Chairman of the Verkhovna Rada of Ukraine, thanked his German counterpart for the timely visit to Kyiv and the constant support for the territorial integrity and sovereignty of Ukraine.
Ruslan Stefanchuk stressed that the Christian Democratic Union was the first to take the initiative at the high political level to provide Ukraine with heavy weapons. The Speaker of the Parliament of Ukraine is looking forward to the positive outcomes in this matter.
"We will be grateful to the German side for any decisions that will help strengthen Ukraine's defence capabilities. At present, we need non-standard solutions, a prompt receipt of the necessary weapons to address the urgent needs of the Armed Forces of Ukraine," the Chairman of The Verkhovna Rada of Ukraine stressed.
The Speaker of Parliament called on Friedrich Merz to use the existing political influence to promote in Germany the positions set out in the Action Plan to strengthen sanctions against the russian federation, initiated by President of Ukraine Volodymyr Zelensky. Among the main areas is the recognition of russia as a sponsor of terrorism; a complete ban on Russian energy exports; expansion of sanctions against the financial sector of russia and Belarus.
"I know that the embargo on Russian oil and gas is painful for Germany but I ask you to support us in this. Because this is a great contribution to the overall sanctions policy against russia," Ruslan Stefanchuk explained.
The politician also invited Germany to join the process of reconstruction of Ukraine after the war and granting our country the status of a candidate country for EU membership.
"Ukraine deserves to be part of a common European home. Acquiring EU membership would be a fair reward for the Ukrainian People, who are paying a very high price for their European choice," stressed the Speaker of the Verkhovna Rada.
According to him, under the fire of russian bullets, Ukraine has melted into the only coin of the European nation that wants to see its place in a united Europe.
"We all now represent the political team of Ukraine who are all fighting for our country. I address you with two things: with gratitude for what you have already done and with hope for what you are going do in the future… putin's machine gun will fire as long as the ammunition is fed into the chamber. Therefore, our common task is to break the economic backbone of this killing machine," Ruslan Stefanchuk said.
For his part, Friedrich Merz noted that since the beginning of the war he has advocated the supply of weapons to Ukraine. He supports our European integration aspirations, because "Ukraine is defending not only its land, but also the democracy and freedom of the whole of Europe."
Поділитись
Tweet
Return to posts