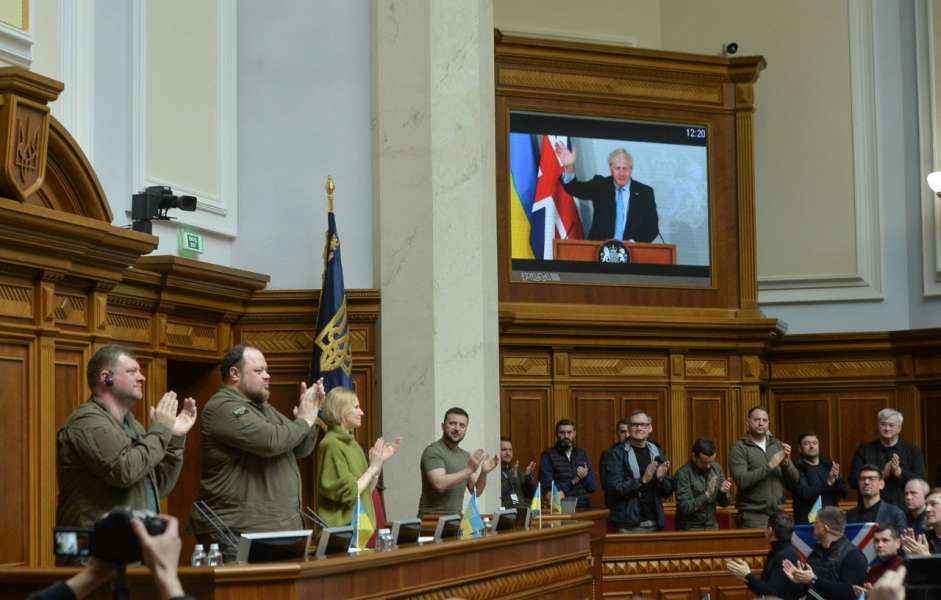 Mr Chairman, members of the Verkhovna Rada,  I’m honoured to address you at this momentous hour when Ukrainians are fighting for the life of their nation and for freedom and democracy against an onslaught by an expansionist power.
When Putin launched his attack, he arrogantly assumed that Russian troops would be marching through the Maidan in a matter of days; he believed that President Zelenskyy and every member of this Rada would be fleeing Kyiv in shame and defeat;   and he might even have deluded himself   that Ukrainians would welcome the invasion of their own country.
How wrong he was; how little he knew of Ukraine; how fantastic was his misjudgement.
When Russian tanks burst across your frontier, Ukrainians fought back with unconquerable strength and courage, and you won the Battle of Kyiv,   you repelled Putin’s assault on your capital, and the fact that the Rada is assembling today shows the failure of his designs.
When I reflect on the astonishing story of the last 69 days, I think of the steel and valour of your armed forces, doggedly defending every town, village and field, and striking back with skill and success.
I think of your farmers putting their tractors to good use by towing away the pitiful smouldering hulks of the invader’s abandoned tanks.
I think of the elderly Ukrainians confronting Russian soldiers in the streets with blunt verbal expressions, which I fear the rules of the Rada forbid me from quoting.
I think of the people of Kherson, protesting against the occupiers, wrapped in blue and yellow, defying tanks and machine guns with their voices and bodies.
I think of the gifted artists of Kharkiv, who staged their annual music festival exactly on time, deep underground in a metro station, as Russian guns pounded the city, and amid the drumbeat of destruction, they held their audience entranced with Bach, Dvorak, and, of course, Oleksandr Konysky’s Prayer for Ukraine:
Боже великий, єдиний,
Нам Україну храни,
Волі і світу промінням
Ти її осіни.
[“Lord, oh the Great and Almighty,
Protect our beloved Ukraine,
Bless her with freedom and light
Of your holy rays.”]
When my country faced the threat of invasion during the Second World War, our parliament – like yours – continued to meet throughout the conflict,  and the British people showed such unity and resolve that we remember our time of greatest peril as our finest hour.
This is Ukraine’s finest hour, an epic chapter in your national story,    that will be remembered and recounted for generations to come.
Your children and grandchildren will say that Ukrainians taught the world that the brute force of an aggressor counts for nothing against the moral force of a people determined to be free.
They will say that Ukrainians proved by their tenacity and sacrifice that tanks and guns cannot suppress a nation fighting for its independence, and even the most ruthless tyrant will never extinguish the lights of liberty.
And as you turned the Russian army back from the gates of Kyiv, you not only accomplished the greatest feat of arms of the 21st century, you achieved something deeper and perhaps equally significant.
You exposed Putin’s historic folly, the gigantic error that only an autocrat can make.
Because when a leader rules by fear, rigs elections, jails critics, gags the media, and surrounds himself with cringing sycophants, there can be no restraint on his power, and therefore no limit on the harm he will do.
And it is precisely because we understand this danger that Britain and Ukraine and all our friends in the democratic world cherish a free media, the rule of law, free elections and robust parliaments, the best safeguards that human beings have yet devised against the perils of arbitrary power.
When an autocrat deliberately destroys these institutions, he might create an illusion of strength and stability – and some people might even fall for that illusion – but he is sowing the seeds of catastrophe, for himself and for his country, because there will be nothing to prevent the terrible mistake that, one day, he will surely commit.
Putin has now made his colossal error, and it was to invade Ukraine,    and the carcasses of Russian armour littering your fields and streets are monuments not only to his folly, but to the dangers of autocracy itself. 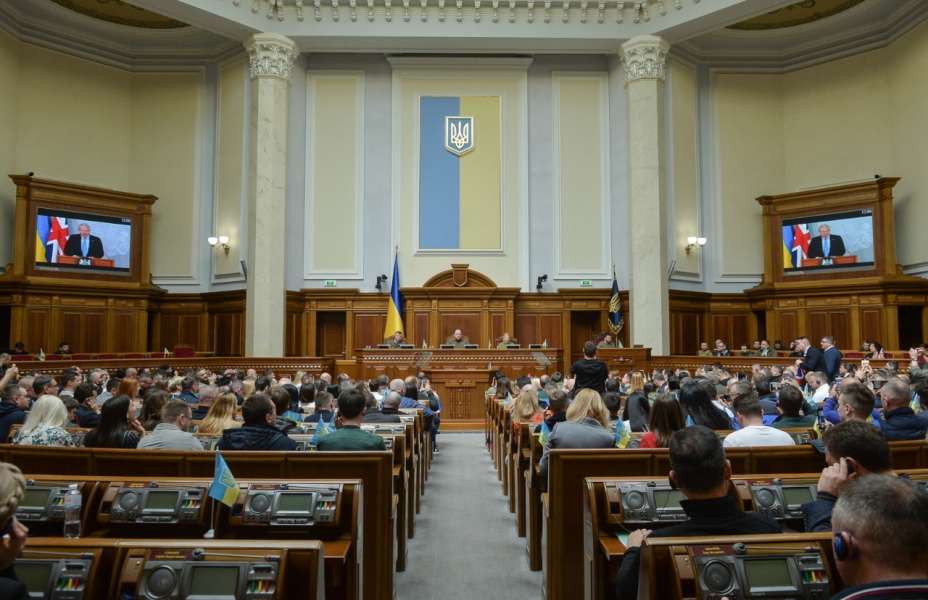 On a day when Putin thought he would be master of Kyiv, I was able to visit your capital and I saw the magnificent defiance of its people and the indomitable leadership of President Zelenskyy.
And with every sight and sound, I learned more of the harrowing price that Ukrainians have paid and are paying for their heroism.
Today, at least one Ukrainian in every four has been driven from their homes, and it is a horrifying fact that two thirds of all Ukrainian children are now refugees, whether inside the country or elsewhere.
And wherever you soldiers have forced back the Russians, they have found a wasteland of ruined towns and pillaged homes, of mass graves and corpse-filled streets, in Bucha and Irpin and Hostomel, and many other places.   And these atrocities betray exactly what this aggressor does when he captures Ukrainian towns and occupies Ukrainian land; the obliteration of Mariupol shows what Putin would do to the rest of the Donbas, if his offensive succeeds.
So no outsider has the right to speak lightly about how the conflict might be settled if only Ukraine would relinquish this or that territory.
We know what happens to the people left in the brutal clutches of this invader.
And we your friends must be humble because when, in 2014, Ukraine was invaded for the first time and Crimea was taken from you and the war in the Donbas began, the truth is that we were slow to grasp the true magnitude of what had happened and we collectively failed to impose the toughest sanctions.

Now there can be no room for doubt: we are determined not to make the same mistake again.
And it is precisely because of your valour and sacrifice that Ukrainians control their own destiny: you are the masters of your fate, no-one can impose anything upon you.
And we in Britain are proud to be among your friends, which is why our Ambassador, Melinda Simmons, is back in Kyiv to reopen our embassy.
In January – just before Putin launched his onslaught - we sent you planeloads of anti-tank missiles and we have intensified that vital effort,   working with dozens of countries, helping to coordinate this ever greater supply line, now dispatching thousands of weapons of many kinds, including tanks and armoured fighting vehicles.
In the coming weeks, we in the UK will send you Brimstone anti-shipping missiles and Stormer launchers for anti-aircraft missiles.
We are providing armoured vehicles to evacuate civilians from areas under attack and protect officials while they maintain critical infrastructure.
And I can announce a new package of support totalling ?300 million,  including radars to pinpoint the artillery bombarding your cities, heavy lift drones to supply your forces, and thousands of night vision devices.
We will carry on supplying Ukraine, alongside your other friends, with weapons, funding and humanitarian aid, until we have achieved our long-term goal, which must be to so fortify Ukraine that no-one will ever dare to attack you again.
The Ukrainian people have the lion’s heart; President Zelenskyy is delivering the roar, and we your friends will sharpen your fangs and claws.
And even in this time of adversity and sorrow, I hope you will find it possible to lift your eyes to the future, to a time that cannot be long delayed,   when by her own heroic exertions a free and sovereign Ukraine lives once again in peace and security.
If I may quote Taras Shevchenko:
В своїй хаті своя й правда,
І сила, і воля.
Нема на світі України,
Немає другого Дніпра.
[“Then in your own house you will see
True justice, strength, and liberty!
There is no other such Ukraine,
No other Dnieper on the plain.”]
Thank you and slava Ukraini!