Information Department of the Verkhovna Rada of Ukraine Secretariat
Published on 22 September 2022, at 21:04 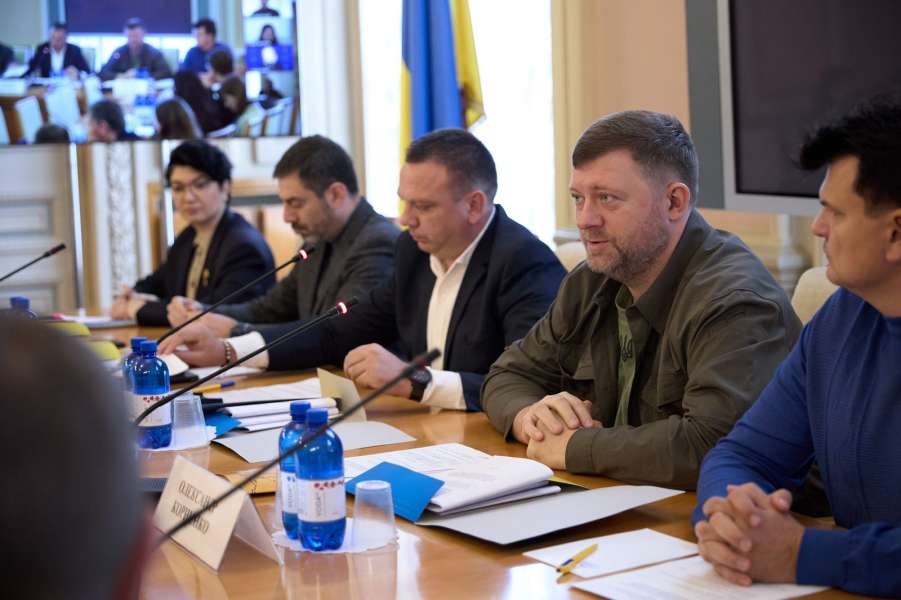 At the beginning of the meeting, Oleksandr Korniyenko reminded those present that in the difficult times that Ukraine is going through today, civil servants faithfully fulfill the oath they gave to the Ukrainian people.

"Civil service and public governance do not just fulfill the oath and remain faithful to it, but also fulfill all the tasks that stand before them. Despite shellings, the deaths, tragically, of many colleagues, remote work, constant air raids, our system of governance has shown its steadfastness, stability and withstood the test of war. We see it from the inside, our international partners also note it," emphasized the First Vice-Speaker of the Ukrainian Parliament.

He emphasized that the state is taking all possible steps to support the system of public service and public governance, in particular, at the legislative level. Thus, Oleksandr Korniyenko reported, the Verkhovna Rada of Ukraine has already adopted in the first reading a bill on support for workers during public service in times of war, on their social protection and certain compensations for families, and honoring by the state of those who died while performing official duties.

"This is the minimum that the state can lay down in the next budgets. It should work at the level of the law," Oleksandr Kornyienko emphasized.

In addition, he noted that no matter how difficult the next year might be in economic or financial terms, the civil service has its own global tasks, in particular, the implementation of reforms that have been planned for a long time.

"We have a new big task that has come to the fore - European integration and harmonization at all levels of our legislation, its implementation and application practices," the First Deputy Chairman of the Verkhovna Rada of Ukraine emphasized, adding that the Ukrainian civil service has to become even more European public service.

According to him, our European progress requires changes not only at the state level, but, first of all, at the level of each individual employee.

"European integration begins with oneself. This applies to people in society, and to every employee, and first of all to changing one's worldview. Approaching the standards of a European employee begins with each individual, department, body, ministry, etc. I think we can do it," Oleksandr Korniyenko emphasized at the end.

Ruslan Stefanchuk: With proper international support, our army can be a shield for a united Europe

Ruslan Stefanchuk: Today, all branches of government are united by one goal - full membership of Ukraine in the EU.

Chairman of the Verkhovna Rada of Ukraine Ruslan Stefanchuk honored the memory of the victims of the mass shootings in Babyny Yar.

Ruslan Stefanchuk: It is important for us that the position of the National Assembly of France in supporting Ukraine is unshakable

Ruslan Stefanchuk: Those who talk about Ukraine must see Ukraine

Ruslan Stefanchuk: On the way to European integration, the Verkhovna Rada of Ukraine aims exclusively at one thing - the result

Olena Kondratiuk: The Verkhovna Rada of Ukraine is grateful to the Parliament of Canada for its solidarity with the Ukrainian people

Ruslan Stefanchuk: The main goal of the Summit is maximum involvement of world parliaments in the issue of non-recognition of the annexation of the Crimean Peninsula

This year, the adoption of the Budget will take place earlier than in the last three years