Information Department of the Verkhovna Rada of Ukraine Secretariat
Published on08 April 2021, at 16:38 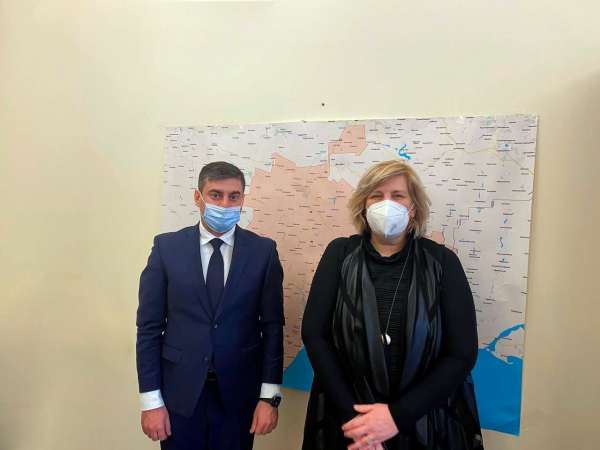 Chairperson of the Committee on Human Rights, Deoccupation and Reintegration of Temporarily Occupied Territories in Donetsk, Luhansk Regions and Autonomous Republic of Crimea, National Minorities and Interethnic Relations Dmytro Lubinets met with Council of Europe Commissioner for Human Rights Dunja Mijatovic. During the meeting, which took place within the framework of the CoE Commissioner's "contact mission" in Ukraine, the parties discussed a wide range of issues.
Among a number of topical issues was the observance of human rights and freedoms in the temporarily occupied territories of Ukraine and on the line of contact.
The Chairperson of the Committee noted that civilians had also recently experienced significant difficulties due to existing restrictions on freedom of movement, in particular those imposed by the occupation administrations, in connection with the situation caused by the COVID-19 pandemic. Such restrictions negatively affect the rights of civilians to health, work, social security and an adequate standard of living.
Dmytro Lubinets also reported on the recent ceasefire violations, the death of four Ukrainian servicemen, and expressed concern over the increase in Russia's military presence near Ukraine's borders.
Ensuring the rights of national minorities in Ukraine was also discussed during the meeting. The Chairperson of the Committee announced the development of a new version of the Law of Ukraine "On National Minorities in Ukraine", the working version of which has already been developed and submitted for approval to the interested in it central executive bodies. Subsequent consultations and discussions of the project with national minorities are also planned.
Another important issue raised by Council of Europe Commissioner for Human Rights Dunja Mijatovic is the fight against violence against women in Ukraine and domestic violence, as well as the need to create an effective system of protection for victims. Since the outbreak of the COVID-19 pandemic, when there has been a sharp increase in reported cases of such violence, the issue has become extremely relevant.
The parties agreed that the strengthening of women's rights in Ukraine, as well as the prevention of violence against women is possible, including through the ratification of the Istanbul Convention, which was signed by Ukraine in 2011, but has not yet been ratified.
The Chairperson of the Committee expressed gratitude for the support of the Council of Europe, which is implementing a number of important and relevant projects in Ukraine, and assured that the Committee, in turn, is always open to cooperation to strengthen the protection of human rights in Ukraine.
Поділитись
Tweet
Return to posts