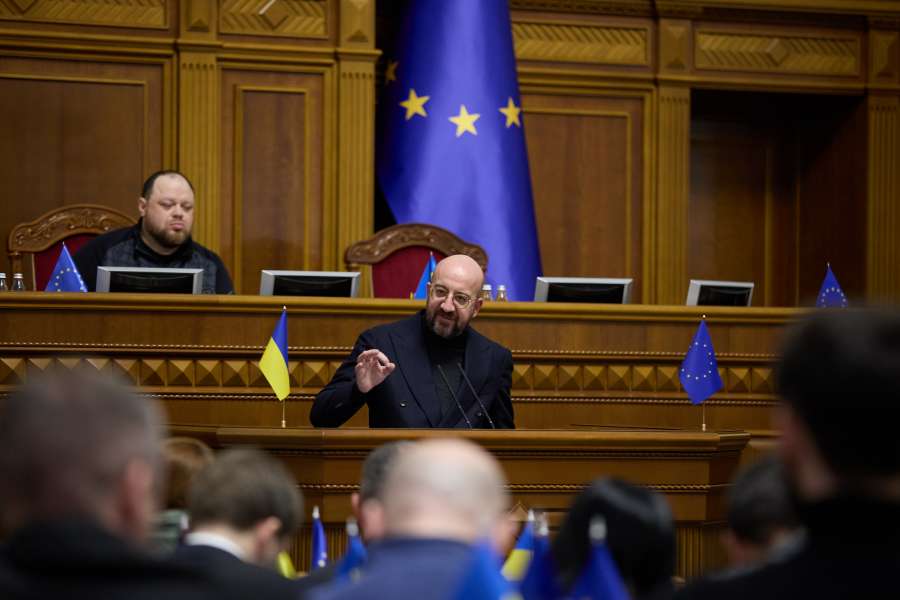 Friends, first of all, I would like to express my deepest condolences to all those who suffered in the plane crash yesterday, including all those who died during russia's aggression against Ukraine. Imagine how terribly moved I am to be with you today. Almost a year ago, we felt the same pain, we were simply in great shock at the russian brutality that we see today in Soledar, in Bakhmut and, needless to say, in many Ukrainian cities. 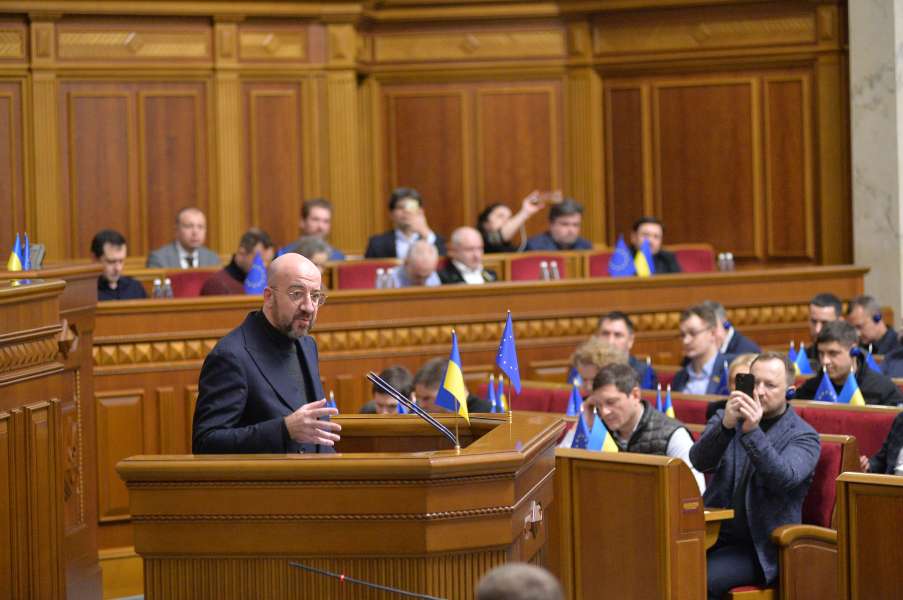 The horrific attack on an ordinary building in Dnipro that killed dozens of people. They are destroying your infrastructure, shelling your cities, targeting your right to simply exist. Why? Because you want to be free Ukrainians, you want to go your own way, you have chosen democracy, Europe. So, by firing missiles at Ukraine, russia is also firing at what the European Union believes in, firing at the very foundations of our Union, the Union that was established after the victory in World War II. It is based on the dream of peace and prosperity; on the Maidan, after twenty years of independence, Ukrainians decided to reaffirm that they are Ukrainians. And today I come to Ukraine to tell you, the people of Ukraine, that we stand with you. 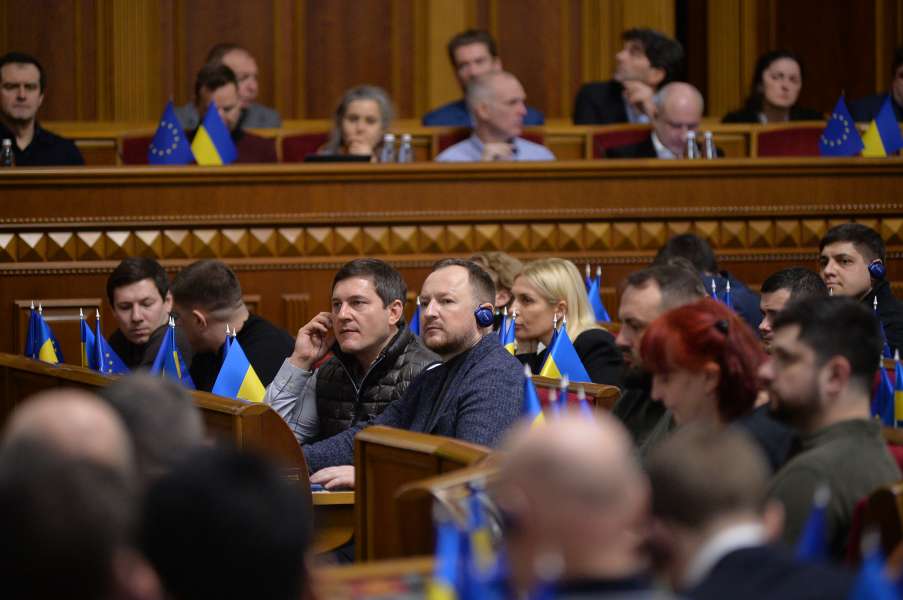 From the first day of this war, we have understood that this is not just an invasion of Ukraine, it is an attack on our common European values, on our European security, on our common European principles and dreams. Dear friends, this is not just a war, it is a strategy of systematic destruction, so that you will submit, so that you will agree to be vassals. And this strategy will not succeed. Ukraine cannot be broken, Ukraine is proud, strong, brave.

Winston Churchill once said that freedom and hope are the most powerful weapons in the fight against the Nazis. 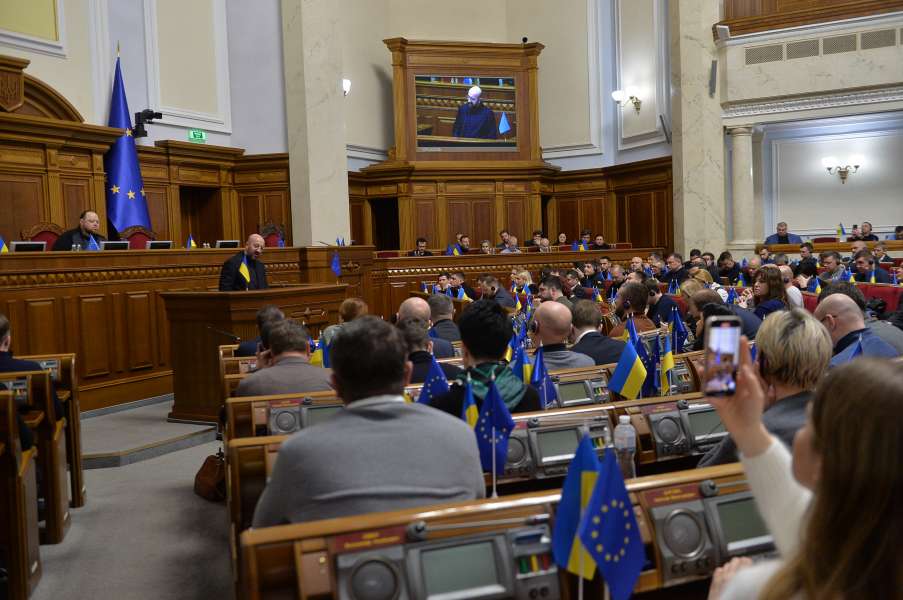 Nelson Mandela managed to free his people, his nation, from his prison cell. And today, Volodymyr Zelenskyi is inspired by your common spirit, and this spirit of Churchill and Mandela can probably be found in the heart of every Ukrainian. I saw it in Odesa, Borodyanka, and Kyiv – you will win thanks to this spirit. We are with you. From day one, russia miscalculated: Ukraine will not fall, and it has not fallen. The European Union is more united than ever, and our ties are stronger than ever. 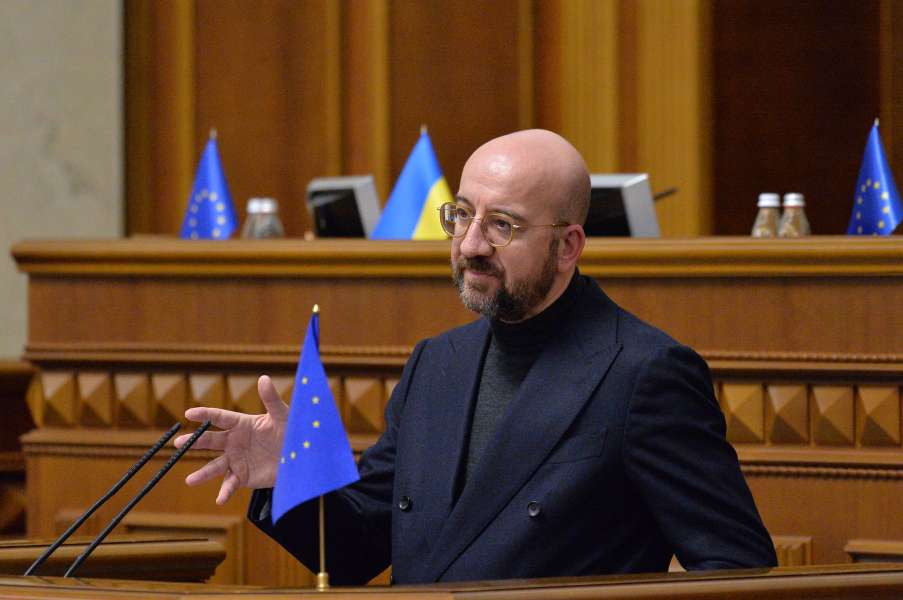 I have several memories that come to mind now. In March in 2021, I was in Donbas with your President, and [he] said that russia is not a mediator, he said, and he was right. On February 24, your President told me: “This is not just an expansion of the operation, this is a full-scale attack.”

Then he addressed the EU Council, the 27 leaders, and said: “Who knows, this may be the last time I speak to you.” I was shocked, it was a moment that opened our eyes. We had to make bold decisions, and it was clear that it was not just the fate of Ukraine, but the fate of all of Europe, the future of our continent, and what Europeans had inherited from their parents. 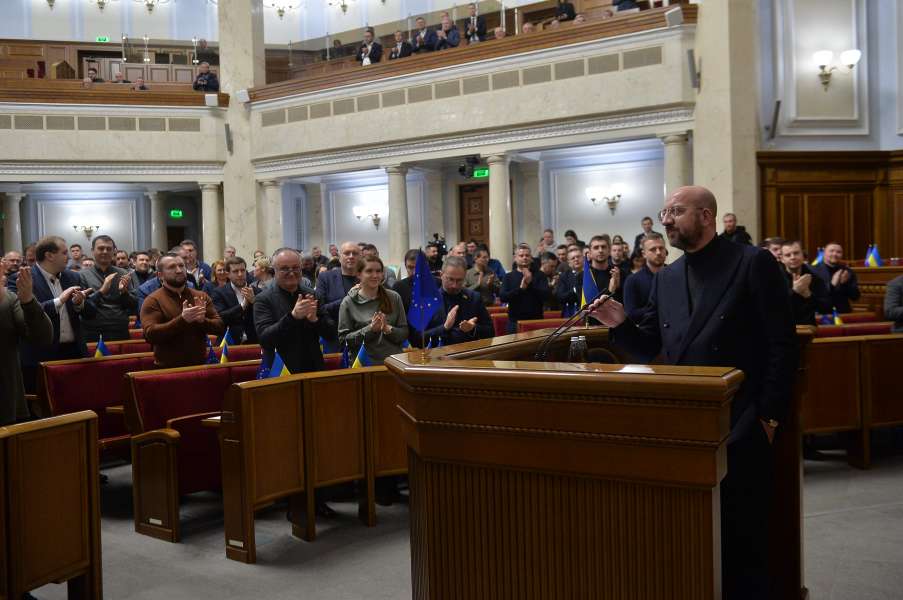 Dear Members of Parliament, I came here today to express my support for you. And you know that 18 billion euros for the 23rd year is a guaranteed amount. We have managed to help Ukraine export 45 million tons [of food]. And we have provided asylum to many Ukrainian citizens, women and children, and we will continue to provide asylum to Ukrainian refugees. 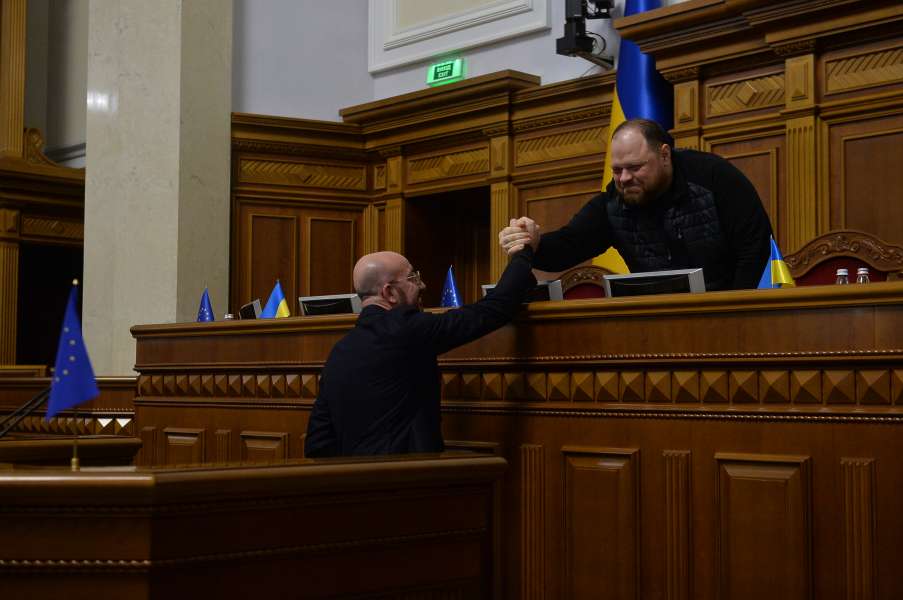 We are helping you win on the battlefield. We heard you need weapons and ammunition from your President at the beginning of this war. Literally three days later, the relevant decision was made. Now these weapons and ammunition are coming to Ukraine. We managed to mobilize 11 billion euros to create a defence fund. We have decided to train 15,000 Ukrainian soldiers. And we know that the coming weeks will be really crucial, so you need more air defence systems, more long-range missiles and tanks, and you need them now.

We are also helping you in the international arena, and we are trying to do everything we can to isolate russia. Nine packages of sanctions have already been adopted, but this is not the end. We want to provide support to your country in Africa, in Latin America, in China, in Asia. And at every meeting we call for support for your country.

Dear Sir, I have no doubt that Ukraine will recover, the damage done to it will be compensated, including through the assets that will be frozen in Europe. And all those responsible for all this damage must be brought to justice. 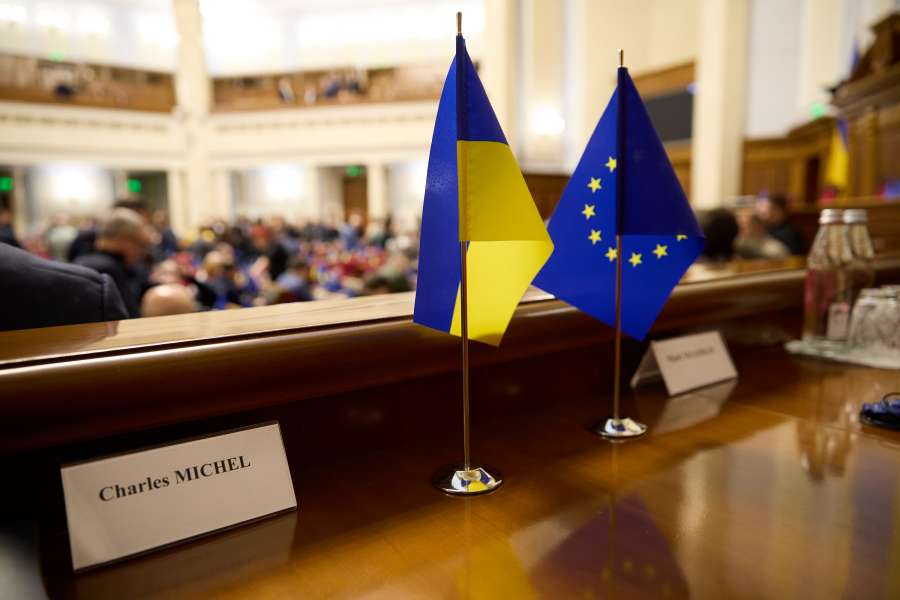 We know that you want to finish the aggressive war. We share this opinion and therefore support President Zelensky’s initiative – the ten-point peace formula. The EU-Ukraine summit will soon take place, and I hope we will be able to express our support for Ukraine and its movement towards the European Union even then.

My dear Ukrainian brothers and sisters, you have understood what freedom is, you know what the values are that we share with you, we Europeans; you have decided to join our Union and you are paying a huge price for it. We will never forget [this]. I met a boy in Borodianka. He told me a story about how the russian soldiers were attacking, and his grandmother turned to them and told them how he felt. He told me what he was thinking, what he was dreaming about. A child should never have to feel like that, not in Ukraine, not anywhere else in the world. 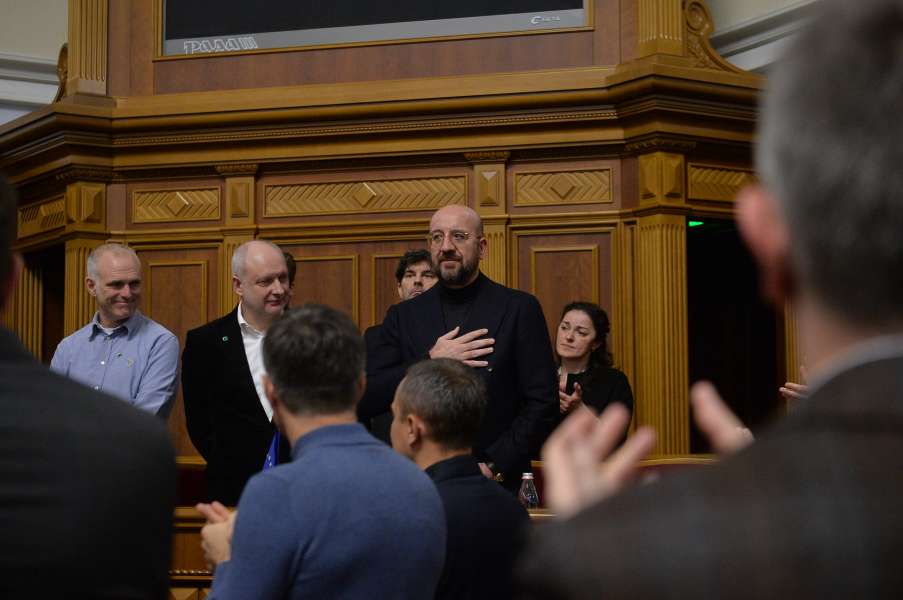 I have not forgotten the eyes of this child, dear friends. The European Union stands with you today and tomorrow, and we will remain with you for as long as it takes to bring this war that has caused so much suffering to an end. I am absolutely convinced that a much brighter future awaits this child from Borodianka, and all of you, a future in the European Union, in a peaceful world, in a prosperous society. We cannot think of a prosperous, secure Europe without a prosperous, secure Ukraine. There can be no free Europe without a free Ukraine. Our future is linked forever.